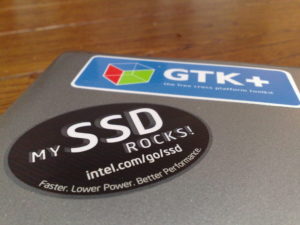 Tech Focus: Why Using an SSD Laptop is a Good Idea

One of the most vital inventions that has graced the world of computing is a solid-state drive, popularly known as an SSD. Thanks to these storage drives, people can enjoy lightweight and snappy computers.

If you purchased a portable computer anytime within the last few years, you’ll likely get and enjoy a laptop with an SSD as the primary boot drive. The boot devices you can find in prebuilt desktop computers mostly have SSDs now (the cheapest models, however, are an exception).

If you’re an on-the-go person looking for your next computer, you’ll want to go with an SSD laptop. Before you check out the laptop brands on the market, let’s look at what an SSD is, how it differs from the traditional hard disk drives or HDDs and how you could benefit from a laptop with an SSD in it.

What is an SSD?

An SSD is a new generation of storage devices present in recent computer models. Unlike a conventional mechanical hard disk, SSD laptops and computers use a memory chip called NAND flash memory.

The adoption of SSDs began in high-performance tech areas, as well as in PC enthusiasts where the storage drives’ high throughput and low access times justified the higher expense. Recently, however, solid-state drives have become an accepted option (and sometimes even the default choice) in lower-cost mainstream desktop computers and laptops.

SSDs have uses in the following areas:

Exploring the Various Types of SSDs

The SSD laptops you come across in computer stores may have different specs, as SSDs typically come in a few different sizes and shapes. These differences can affect a computer’s thermal output, speed and storage capabilities.

Here are a few common SSDs you’ll find in laptop and desktop computers:

What are the Benefits of Buying a Laptop with an SSD?

Whether you’re browsing for a laptop in the mall or at the Facebook Marketplace, you’ll need an excellent storage device. As you boot up your PC, launch programs and switch between tasks, the CPU is waiting for data to load from the storage device. Even if your computer isn’t doing anything, your programs and operating system use virtual memory, also known as swap files, in the background.

The first storage device you should consider when shopping for a laptop is SSD.

Since a solid-state drive has zero moving parts, it can write and read data faster than a hard drive. The fast speed is noticeable when you power up your laptop or open an application. Instead of waiting for several seconds for Microsoft Word to launch, you only need to wait a couple of seconds. You don’t have to wait for the spinning blue circle and whisper “Let’s go, Windows. I don’t have all day.”

Another benefit of a laptop with an SSD in it is the storage device’s durability. If you accidentally drop a notebook equipped with a traditional hard disk, you could damage the drive’s physical components.

On the other hand, the solid-state drive is unlikely to suffer any major damage if you drop your laptop carelessly. An SSD laptop, therefore, is a safer storage medium if you want to preserve important and valuable data.

Important Note: An SSD does not save you from not backing up your files to the cloud or a secondary storage device. You still need to back up your data if the other components of your laptop, such as the motherboard and the CPU, sustain damage and fail to work properly.

Hard drives will emit noise when they’re in use. They have mechanisms inside that make the read arm tick back and forth, as well as the drive platters spin. Faster hard drives tend to make more noise than their slower counterparts.

You won’t come across this problem when you choose an SSD for your next laptop. This storage device doesn’t have mechanical components.

If you see yourself carrying a computer wherever you go, you’ll benefit from an SSD laptop. Solid-state drives are lightweight compared to conventional hard disks. This development has enabled manufacturers to produce ultra-thin tablets and laptops and other mobile devices.

Laptops with SSDs malfunction far less compared to those with hard-disk drives. Widespread material improvements, such as the error-correction code (ECC), contribute to the media device’s low failure rate.

Exploring the Laptop Brands with SSD

Take note, though, that an SSD alone doesn’t make the perfect computer. You also need to consider the brand for your PC.

To find the best SSD laptops on the market, check out these options:

This nice, compact and lightweight personal computer comes with a 256GB solid-state drive. The Zenbook 13 features an 8th generation Intel i5 CPU, which complements the SSD. Unless you’re working with huge amounts of high-quality, this SSD laptop may be enough to fulfill your computer-related needs.

This fantastic computer is both a touchscreen tablet and a convertible SSD laptop. Apart from the 256GB to 2TB solid-state drive, you’ll enjoy the computer’s stellar features, including a 4K ultra-high-definition touchscreen display, 16GB of RAM, and an active stylus pen for writing and drawing.

If you want to jump off the Microsoft bandwagon, you’ll want to take a look at the Apple Macbook Pro. This laptop offers a 256GB SSD along with other cool features, such as a Retina Display for a vivid viewing experience, a battery that lasts a whole day of work and lightweight components that you could easily carry anywhere.

Regardless of the SSD laptop you choose, you’ll definitely benefit from the lightning-fast computer performance to help you get your work done more efficiently (and play awesome games if the laptop has an excellent graphics card). So take the “solid-state plunge” by investing your hard-earned money in a computer with an SSD.